The world is in a fair bit of chaos right now, it’s true—mostly due to COVID-19 as we’re all painfully aware. We’re also well educated on the dismal pall that the virus has cast on live events, sports games, social gatherings, pretty much every sector of the economy and basically, life in general. One of the many byproducts of such global upheaval is the drastic reduction of marketing budgets. And though a reduced ad spend may seem like the surest way forward, we’re here to steer you in another, more successful direction.

On one hand, slashing advertising budgets in the face of global uncertainty makes sense. There’s a decline in sales demands and consumer traffic, due to the reality that more people have less income and job security, and other unfavourable changes in the marketplace overall. But to the savvy marketers or ones who have lived through similar but less pronounced market disruptions, the obvious answer is the opposite: marketers should be working with an increased ad spend.

Is an increased ad spend really the answer?

Up until COVID-19, your carefully allotted marketing dollars went towards gaining momentum in the marketplace and constantly expanding the reach of your brand’s voice in that same marketplace. However, without the budget to at least maintain your hard-won position, you leave space in the advertising landscape to be taken up by none other than your competitors. This will undoubtedly unseat your brand from its position in the marketplace and cause it to recess the mind of your consumers.

The unfortunate thing about the global marketplace upheaval is that it could take years to right itself. Similarly, the virus could be with us still many months down the road. Trying to wait for either or both of these to pass in order to resume your ‘usual’ marketing spend is neither logical nor do-able for most brands. And so, the conclusion remains: an increase in, or at least a steady hold of previous, ad spend is the surest way forward.

Maintain your Place in the Market

There will never be a better time to step your brand further into the spotlight than when your competitors have retreated to their boardrooms, only allowing the smallest sliver of brand messaging out the door. Bids to win what would usually be stellar placements on websites, homepages, and DOOH screens will become much lower as other advertisers back out and scale down—leaving your brand the perfect opportunity to nab premium ad real estate at bargain prices.

Fewer Consumers is still Some Consumers

A global crisis affects consumers, no doubt. But rather than suppressing all consumer needs, it instead redirects these needs and often changes the way consumers go about filling them. COVID-19 closed most physical stores and shopping centers around the world and so most of the consumer demand switched to e-commerce, mobile shopping, and other avenues of online shopping. Brands and retailers need to adapt their business and marketing models so that they can meet the consumer on this new frontier of commerce. Without an increased ad spend to publish marketing materials that let your audience know you understand the reasons behind their changed behaviours and are still able to meet their new needs, your customers may find your competitor’s marketing fits the bill instead.

One of the closest resembling market disruptions to our current climate is the Great Depression. During this time, two companies were the main and closest competitors in the cereal industry, Kellogg’s and Post. When the Depression started to make enough disruption in the economy that consumer demand became a question mark, Post cut their advertising budgets. Kellogg’s, on the other hand, doubled its budget, even releasing a new cereal, Rice Krispies. By 1933, though the economy was near its lowest point, Kellogg’s profits had soared by 30% and what’s more, Kellogg’s landed as the cereal industry’s dominant brand. A place it arguably still holds today. 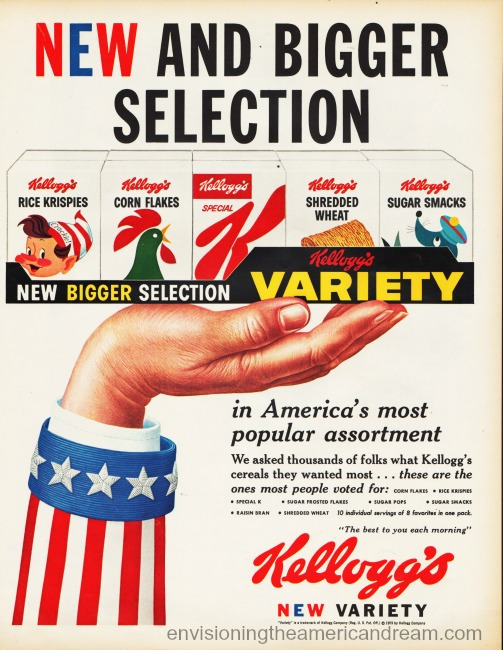 Though we’re advocating for an unchanged advertising budget, that doesn’t mean we’re advocating for a media plan that’s unchanged as well. Depending on your audience and sector, a great deal of your advertising plan may need to change. With fewer and fewer people out and about or travelling, online and digital advertising is one of the best places to get a good ROI. Customers are staying inside and away from crowded places as much as possible, opting instead to scroll through social media, watch YouTube, and shop online.

An increased ad spend doesn’t necessarily dictate the need for the creation of brand new campaign material. Especially with the restrictions of COVID-19, getting a creative team together to concept and create a whole new campaign is nearly impossible. That’s where campaign refreshes come in. Campaign refreshes will allow you to spend more of your budget getting your message to your audience and less on creating completely new assets.

While your competitors wait for the storm to pass, your branded assets can stand out and meet consumers in the new retail landscape we’ve suddenly found ourselves in.

Back to blog link

Get in touch with The Bannermen and see what we can do for your digital display plan
Cookies help us deliver our service. By using our services, you agree to our use of cookies.